Brevard County, Florida, is one of the largest counties in the state – known mostly as home of the John F. Kennedy Space Center on the east coast and serious about maintaining its infrastructure with high-value equipment. On a jobsite at Merritt Island in the county, the Public Works Department relied on just one piece of equipment to unearth and repair a water line beneath a street and then replace an outdated catch basin cover followed by loading dirt.

GRADALL VERSATILITY ADVANTAGES
“We use it daily,” said operator James Aquino of the county’s XL 4100 IV excavator. That day, the Gradall was used to remove pavement and then dig down five and a half feet to determine the cause of a leak that had created a dip in the asphalt pavement. At the end of the workday, the Gradall boom was used to install steel covers over the hole for overnight safety. 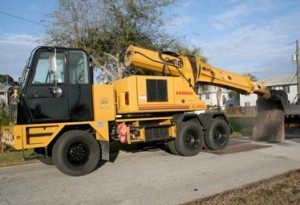 The next day, Aquino used the XL 4100 IV to remove the steel covers, refill the hole with limerock and then spread more fine aggregate material, creating a smooth grade with the delicate Gradall bucket movements. After compaction, a crew topped off the hole with asphalt. But that wasn’t the end of the workday for the Gradall. From the upperstructure cab, Aquino drove the machine several hundred yards down the street onto a grassy park area, around a guardrail and fence and into position to repair a catch basin cover. Never once leaving the operator cab, Aquino removed an old concrete cover over a c 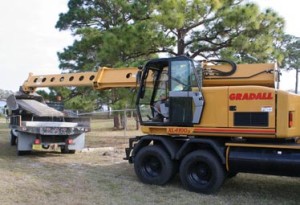 atch basin and replaced it with a new one, precisely positioning the huge concrete slab with the XL 4100 IV precise boom movements. “This machine is used for all kinds of jobs, like pulling out old sidewalk, removing trees, highway repairs and ditch cleaning,” said Aquino. “And lots of times, at the end of the day, we use it to load trucks with fill dirt to be used at different locations the next day.” Aquino, who has been operating Gradalls for about 10 years, said he is very pleased with the Series IV model. “With the automatic transmission, it’s much easier to get down the road from the equipment yard to wherever we need to work,” he said. “It’s also a lot more comfortable and easier to work with because it has more power.” Changing the mobility controls from the carrier cab to the upperstructure cab is also much easier than with earlier models, he said. “I like this one a lot, and I can get a lot more done with it on an average day,” he added.