Like most cities and counties in the state of Florida, keeping storm water drainage mechanisms clear and functioning is a top priority for Casselberry, Florida. From catch basins to culverts and retention ponds, water management is a critical job for this city – a residential community on the outskirts of Orlando.

GRADALL VERSATILITY ADVANTAGES
Not long after the city of Casselberry took delivery of its XL 3100 IV Gradall excavator, it was put to work clearing soil and vegetation from critical drainage culverts along Rt. 436. “The material that has collected in front of the drains is anywhere from one to four feet deep, collecting over several years,” said Rod Wongus, crew supervisor for the storm water division of the city’s Public Works Department. “ 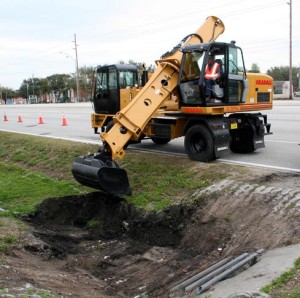 With the Gradall, we can clear away the entrance to about four catch basins a day, and then clean out the inside of the pipe with a hydro excavator. Without the power and boom movements of the Gradall, we’d have to do it by hand – a much slower and, obviously, labor intensive process.” With a short rear tail swing, the XL 3100 IV can be positioned and maneuvered along the edge of the six-lane highway, only blocking one lane. Operator Scott Mandigo said that not only is it easier to reposition the carrier from the upper cab, the machine is quieter, more powerful and more sensitive to movements of the joystick controls. “I really love this machine,” he said. “It’s also very good in swales.” That’s another storm water management task for the machine, according to Wongus. During the dry season – before the spring rains – the Gradall will be used to dredge about 23 miles of ditches and low-lying swale tracts to make sure water runoff can be handled efficiently. “When that is done, we’ve got plenty more for it to work on, like sidewalk replacement and general repairs,” he said.