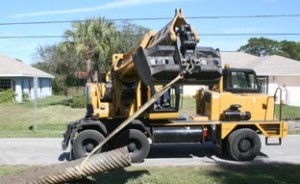 Maintaining infrastructure is an ongoing challenge for most municipalities and counties throughout the U.S. At Port St. Lucie, Florida, near the state’s east coast, the drainage division of the city’s public works department has an ongoing program to replace culverts in residential neighborhoods. Functional culverts are important for collecting and channeling storm water, but they can become ineffective if the pipes deteriorate or they become overgrown with vegetation.

GRADALL VERSATILITY ADVANTAGES
The city of Port St. Lucie uses an XL 4100 IV excavator for its culvert replacement project, which includes replacing steel pipes that were installed beneath concrete driveways up to 20 years ago. 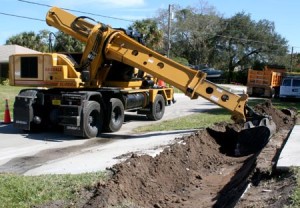 “The process starts with cutting concrete on the driveways,” said Bob Colson, crew leader for the drainage division. The XL 4100 IV removes the pavement and then carefully excavates dirt from around the culvert pipe before actually removing the pipe. “If the pipe is in good condition, we set it aside and re-install it later,” said Colson. “But a lot of them have rusted away and have to be replaced with aluminum.” The XL 4100 IV is used to clear out dirt to restore the proper grade before re-installng pipe and then spreading dirt and aggregate in preparation for a new concrete driveway section. “With the Gradall, we can replace three driveway culverts in a day, and also lay new lines between the culvert pipes under the driveways,” said Colson. “Without the Gradall, we’d have to do it by hand and we couldn’t manage anything near that level of productivity in a day.” Arthur Agnew, who said he’s been operating Gradall excavators for nine or 10 years, said he really appreciates the automatic transmissions that are standard on Series IV models with highway speed undercarriages. He drives the XL 4100 IV from the equipment yard to work sites every day. “The new Series IV excavator is also a lot more powerful than the Series III models,” said Agnew, adding that he also appreciates how fast he can transfer mobility functions from the carrier cab to the upperstructure cab. Although there’s an in-cab switch to change the joystick configuration from Gradall to Deere or SAE, Agnew said he prefers the original manufacturer’s pattern. “That’s what I’ve always used, but I can see where it would come in handy with a new operator,” he said.